In this technology-driven world, mobile apps have taken a central place in our lives. But, how would you establish trust that your user’s data is encrypted? Here are the top 8 ways to protect and securing mobile apps.

Securing mobile apps has become a serious concern for businesses! Wondering why and how?

Today, with jaw-dropping advancements in technology, now people have an app for everything. Two decades back have you ever thought about having an app that can order your groceries with a voice command?

People can do virtual shopping by leveraging personalized recommendations. They can travel all across the world by sitting at home by using the richness of VR technology.

Google’s Alexa can listen to your command and smartly operate your appliances. Users can make transactions anywhere, anytime by using banking apps.

There is much more that people can do with mobile devices and applications. And businesses from all over the world have realized the exceptional growth of the mobile app economy. Therefore, they are embracing various technologies to build an app.

Even businesses that haven’t had any digital presence in past are strongly paving their way into this domain. Today, having a business mobile app has become a mandatory requirement if you want to stay ahead of the competition.

However, to make these apps work flawlessly, it requires personal user data. Convincing users to enter their personal details or information into the app is a big task. You have to provide a platform that can be easily trusted. And that’s where mobile app security becomes a pressing issue for businesses.

If you are still taking security for mobile applications as a casual topic then you should look at the market share of mobile apps. 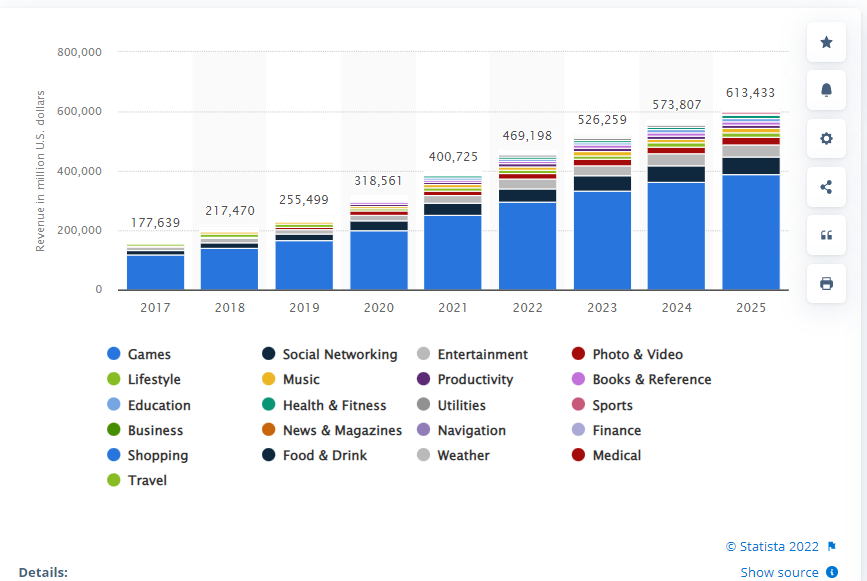 In a nutshell, with these statistics, it is clear that the usage of mobile applications will be surging over the next few years. While the use of mobile apps is increasing, it becomes necessary to hire mobile app developers in India to ensure mobile app security.

But the central question is how to ensure security for mobile applications.

Before you get straight into the process of hiring app developers in India, let’s dive into the top for securing mobile apps in 2023.

It goes without saying that the mobile app space has exploded in recent years with hundreds of thousands of new apps being released every month across all platforms, including iOS and Android.

These apps can range from great to terrible in terms of functionality, design, and overall user experience (UX), so there’s no doubt that you need to know what you’re getting into when you download an app and put your information into it.

No matter whether you are about to launch an app or it has been already used by thousands of users, you need to adopt best practices for securing mobile apps.

After evaluating the developer’s concerns and common securing issues, here we have listed top practices for securing mobile apps.

1. Tip for Securing Mobile Apps – Ensure To Have a Secure Mobile App Coding

Securing mobile apps become simpler if you know what to address and when.

It is most common for attackers to exploit bugs or vulnerabilities in code in order to break into an application. All they need is a public copy of your app to reverse engineer it and tamper with it.

It has been estimated that over 11.6 million mobile devices are being affected by malicious code at any given time, according to market research.

Make your code difficult to hack by hardening it, obscuring, and minifying it to prevent reverse engineering. Your code should be easy to update and patch. Test repeatedly and fix bugs as soon as they arise.

To implement these tips, you can consider hiring software developers in India and make sure that your app code is bug-free.

Protecting your servers is a big step in any security protocol. There are many ways you can do this, but the most basic way is with firewalls. This will keep people from breaking in and potentially hijacking your servers.

Moreover, information shared with the server through the app should use a HTTPS connection, which prevents hacking or anyone who owns a network that isn’t secure from altering any HTTP traffic to take advantage of the user.

Additionally, you want to make sure that you don’t leave any holes for hackers by not leaving ports open that shouldn’t be. So here are a few practical ways of securing mobile apps:

In a nutshell, securing mobile apps is no more a challenging task for you if these tips are carefully followed.

If you want to send someone a message that only they can read, you encrypt the message using their public key.

The person will decrypt it using their private key. If the sender shares his public key with all of his friends, then any friend can send him messages that only he can read. Public-key encryption protects messages from being tampered with or eavesdropped on.

It also guarantees that a message really came from who it claims to have come from and has not been modified along the way (eavesdropping).

In this scenario, even if an attacker intercepts the encrypted messages while they are being transmitted between two parties on an insecure channel such as email or SMS texting, all they would get is gibberish without knowing how to decrypt them.

With some of the biggest security breaches occurring due to weak authentication, stronger authentication is becoming increasingly important. By definition, authentication involves passwords and other identifiers that act as barriers to entry.

For Android Apps, you can hire Android app developers in India to create an authentication system specific to their app interface.

They can create a strong system that can encourage your users to be more sensitive towards authentication, but a large part of this depends on the end users of your application.

If you want your apps to accept only strong alphanumeric passwords, you can require them to be renewed every three or six months. For overly sensitive apps, biometric authentication, such as retina scans and fingerprints, can also be used. Increasingly, multi-factor authentication combines static passwords with dynamic OTPs. 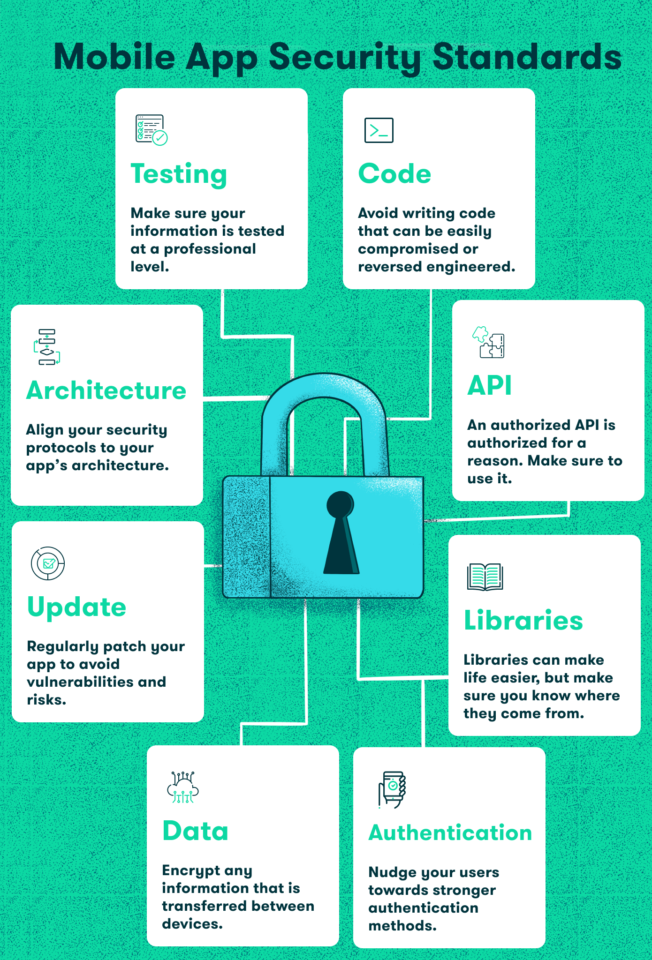 If you are using any third-party libraries for your mobile app, make sure to use only authorized third parties. If you need a library that does not seem legitimate, do more research on the company or contact the developer before downloading.

Do not download any files from unknown sources, even if they are coming from the library’s website. Be aware of what permissions your apps are requesting when installing them. It is important that you only grant access to the features you actually need in order to protect your data and avoid malware risk.

When it comes time for upgrades, make sure that you keep up with them as soon as they become available. If an update includes a new security feature, install it as soon as possible since it may have already been compromised by hackers who discovered it before you did.

When developing a mobile app, it’s important to test your app before releasing it. The first time you release your app, it should be a beta version where you invite people who are interested in the app to use it and provide feedback.

After that initial release, start monitoring analytics on what users are doing within the app. As new features are added or bugs arise, monitor analytics again and make changes as necessary. If there are no improvements to the user experience after changing something, add something else.

An ongoing process of testing and refining will help ensure success for your business.

It is also important for app developers to take steps for data security such as encryption and backing up data offline so that if an application is compromised, data can still be retrieved.

With all these tips in mind, developers can have peace of mind knowing they have done everything they could do to create an application with the best security measures possible.

A significant number of mobile applications use a client-server architecture, making security measures a necessity to protect against malicious attacks on backend servers.

Developers assume only apps that are programmed to access APIs can access them. In spite of this, you should always verify APIs according to the mobile platform you intend to code for, since API authentication and transport mechanisms differ from one platform to the next.

When API access is not authorized and loosely coded, hackers can access important information unintentionally. When programmers cache authorization information locally, they can reuse that information when making API requests.

In addition, it facilitates the use of APIs by coders. However, it also gives attackers a loophole to gain privileges. APIs should be authorized centrally for maximum security, according to experts.

No one wants to think about their data being compromised. And yet, it’s happening all the time. This is why it’s important for you to take precautions such as using strong passwords, enabling two-factor authentication, and only downloading apps from trusted sources.

Take the steps necessary now before it’s too late! If you are still in a dilemma that where to get started and what exactly is lacking in your mobile app then AppsDevPro can be your ultimate place to hire app developers in India.

We have a team of experts to analyze your mobile app and assist you with best practices for securing mobile apps. To know more about services and cost estimations, you can contact us or drop your query below.

How to Secure Your iOS Mobile App?

The first thing you should do is change your passwords. Use a different password for every account you have, then make sure the passwords are long and complicated with numbers, symbols, and capital letters.

You can also use a password manager like LastPass that will generate strong passwords for you. Next, download an antivirus app to scan your device for malware or spyware; this will protect you against the most common threats.

For professional assistance, you can hire iOS app developers in India to address your mobile app security issues.

How To Secure Your Android Application?

The following are a few tips on securing mobile apps: