How AI is Changing the Autonomous Vehicle Industry?

Do you want to know how AI is impacting the autonomous industry? This blog explores some important areas of the Automobile industry where artificial intelligence is being used. We have talked about the contribution of AI in the automobile industry; especially in self-driving cars. Read on to know more about it.

From Google’s self-driving cars to Tesla’s driver assistance features, artificial intelligence (AI) is changing the way we think about autonomous vehicles. For years, researchers have worked to develop AI that can effectively support driving and, in many cases, outperform human drivers. But how does it work? And how does it affect the future of automobile transportation? Let’s take a look at why is Ai in self-driving cars doing good.

Self-driving cars have become a hot topic, with their future looking bright. So what’s all of that buzz about? Here are some impressive statistics about self-driving cars that prove they aren’t just tested technology.

Self-driving Cars are Closer than You Think 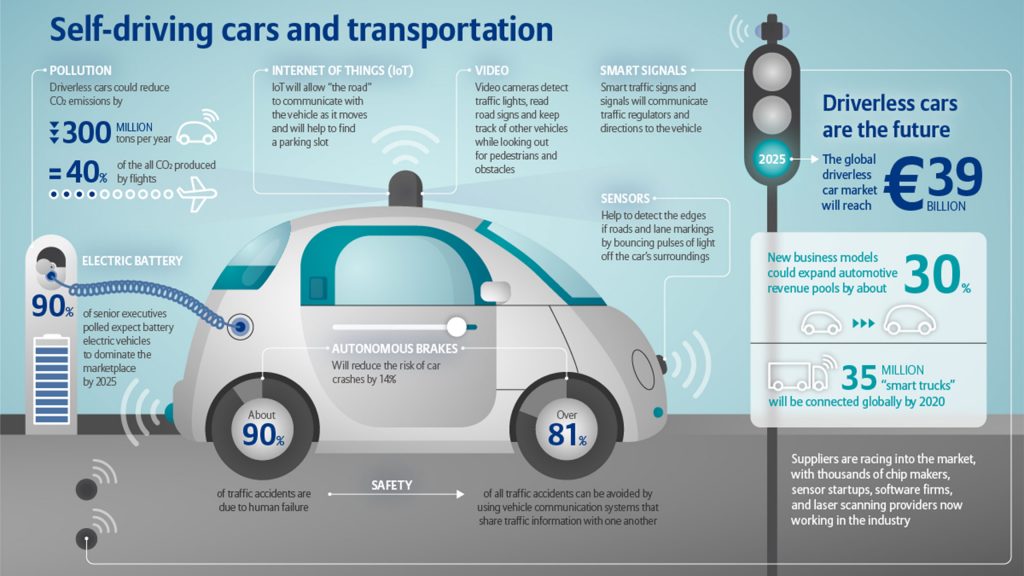 While fully self-driving cars are still a ways off, automated car systems like Tesla’s Autopilot are already on our roads. And when it comes to AI for autonomous cars, we’re already seeing AI in autonomous vehicles that can sense what other objects in its environment might do next and react accordingly. In fact, research shows that self-driving cars could become safer than human drivers within just a few years. Here’s how AI will take over our roads one day soon.

AI for autonomous cars and AI in autonomous vehicles are already here: Some of these developments are happening now, with current models like Tesla’s Autopilot—and we’re likely to see more coming into play within just a few years. By 2022 end, research suggests that driverless cars could become significantly safer than human drivers—fatalities will be reduced by 90%. Soon, these AI in autonomous vehicles may drive themselves completely.

Why Companies are Investing in Self-driving Cars?

Big companies like Google and Tesla have already spent billions of dollars on research and development for self-driving cars. And now, more and more startups are flocking to capitalize on major investments in artificial intelligence (AI) technology. With all that money being poured into the sector, it’s no wonder why investment from traditional automakers is at an all-time high. 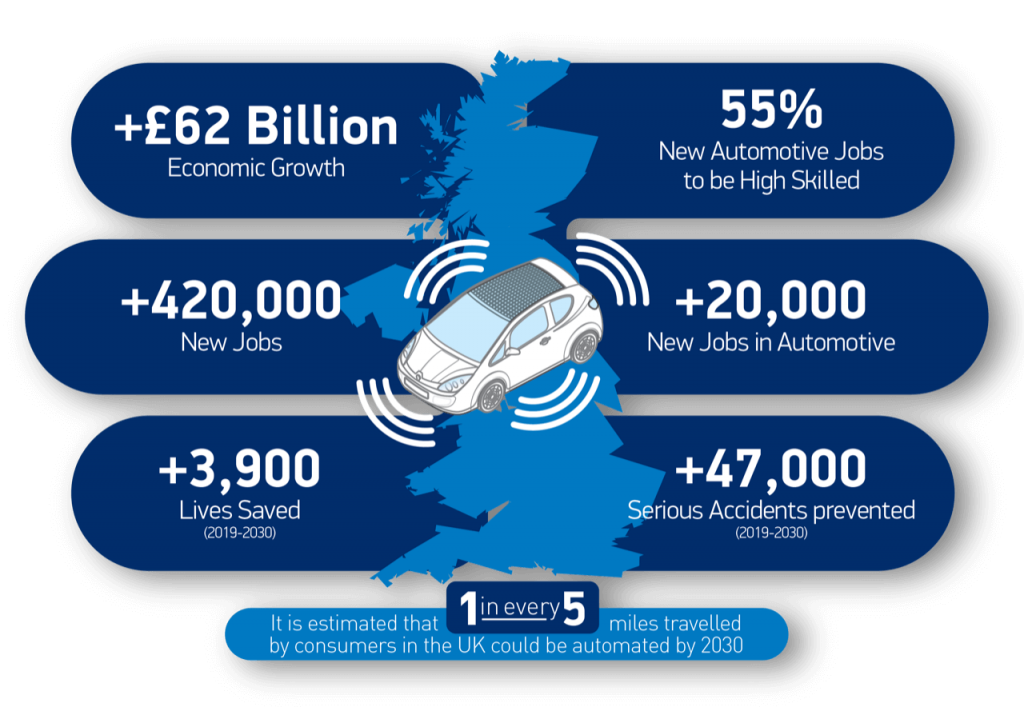 According to a report from Intel and Strategy Analytics, there was 20 million self-driving cars in 2020. That’s up from 2 million in 2017. The report also predicts that software systems for self-driving cars will grow into a $77 billion market by 2030. This means we could see an explosion of lucrative revenue streams for new businesses seeking to capitalize on those opportunities.

The Technology Behind Self-driving Cars

From concept to reality, self-driving cars are nothing short of complex. It’s not enough to place a camera on top of a car and call it an autopilot system, which seems to be how a lot of other AI for autonomous car companies operate. Rather, companies in this space should be building systems that can handle every single scenario you may encounter on the road, from pedestrians running out into traffic without looking to sudden debris on a highway.

The role of artificial intelligence (AI) in self-driving cars is twofold: first, to provide high-level oversight by recognizing potential hazards, and second, to help navigate roads by using sensors like cameras and radar. For example, if your car detects a large truck driving at high speed directly ahead of you while there’s little time to react, it will alert you via audio or visual cues so that you can take evasive action.

Role of AI in Self-driving Cars 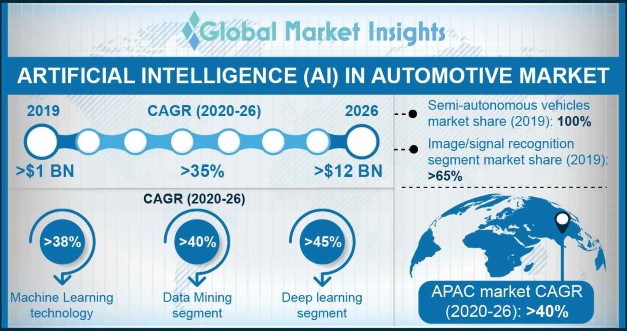 Let us now study some more in deep about the role of AI in self-driving cars.  Artificial intelligence has become a buzzword for many industries, including automotive and transportation. The truth is that artificial intelligence (AI) has been playing a major role in car manufacturing for decades and will continue to do so for years to come.

Today, thanks to large amounts of data and powerful computer processors that can analyze these data, cars are becoming increasingly automated. There are millions of cars already on roads around the world with features such as adaptive cruise control, automatic braking, and blind-spot detection. The next step will be fully autonomous vehicles – which Google first introduced in 2012 through its Waymo division.

How Google is Using AI for Self-driving Cars?

One such example of Google’s use of artificial intelligence in self-driving cars involves a technology called machine learning. Machine learning allows cars to learn from their own experiences and from other drivers. Over time, as more people use Google’s driving service, all those cars will collect data about which driving techniques work best in certain situations. This information can then be used to help all cars drive more safely.

How Tesla is Using AI for Self-driving Cars?

Tesla’s self-driving cars use artificial intelligence to make driving safer. Autopilot technology can identify road hazards and other obstacles in real-time, adjusting to each new situation as it arises. The human behind the wheel doesn’t have to do a thing—until there’s a need for human oversight, that is.

In addition to making roads safer, Tesla is also using its fleet of electric vehicles to collect data on how drivers behave when they aren’t at the wheel. This data will help inform future models of self-driving cars.

Tesla already uses neural networks to control self-driving cars, but it’s planning on taking things further this year. The automaker plans to open-source its software and hardware, which will allow automakers and engineers to use Tesla’s AI technology for themselves. Instead of hoarding tech that could make our roads safer, Tesla wants other companies to work together toward a common goal: safer, more efficient transportation.

Tesla’s advancements have made it a leader in self-driving cars. But other companies are developing their own autonomous vehicles, too. Notably, Delphi announced plans to put its self-driving tech into General Motors vehicles in 2019. Additionally, Chinese search giant Baidu is teaming up with BMW and Intel to work on self-driving car technology for mass production. Other notable players include NuTonomy and Google’s Waymo division.

Why Driverless Cars will replace Taxis and Trucks First?

Autonomous vehicles are much more than new technology. They’re a step in a new direction for how humans will move and travel. Driverless cars will fundamentally change society, and their introduction may happen faster than you think. Here’s why taxis and trucks are first in line to be replaced with driverless vehicles

Driverless cars are set to improve traffic flow, reduce accidents, and save lives. Autonomous vehicles will provide greater freedom for people with physical disabilities. A vehicle that drives itself can take anyone anywhere they need to go – driverless cars are more inclusive than taxis or public transit because they don’t require a human driver to operate them.

Why Taxis and Trucks are first in line?

The taxi and trucking industries are first in line to be impacted by driverless cars. That’s because they use human drivers, who can’t stay awake forever, work a full-time job, or maintain complete attention on long journeys. Autonomous vehicles will make long-distance travel less stressful and more efficient for passengers and freight companies alike.

Driverless taxis also have an advantage over taxis with human drivers: no tipping!

The Future of Driverless Cars

Self-driving cars are being tested on public roads all over, but they still have a long way to go before they’re ready for primetime. While it may seem like driverless cars are merely science fiction, automakers are pouring billions of dollars into R&D and new tech to bring them to market faster than you think. But how will driverless vehicles impact society? Here’s everything you need to know about AI and driverless vehicles.

Self-driving cars are more than just a luxury—they’re a necessity. Here’s why you should be paying attention to driverless vehicles and how AI will impact your life in ways you never imagined.

While there are plenty of ethical questions that surround driverless cars, these vehicles will undeniably change how we live.

5 Reasons You Should Invest in Building Self-driving Cars

There are many ways AI can be used in the automobile industry. The above image displays that. Moreover, self-driving cars are becoming more and more prominent in our society. For example, driverless cars have been used by Google for several years now, and similar

technology was used to win the DARPA Challenge which involved self-driving vehicles racing on a track.

Below are 5 reasons for building self-driving cars

1) It’s safer. With computers behind their wheels instead of fallible humans, autonomous vehicles will make driving safer than ever before. Driver error causes thousands of fatalities each year and is one reason why you can’t or shouldn’t drink while driving or drive if you’re too tired after working all day. Computers aren’t affected by alcohol or lack of sleep so they can react faster than people – and possibly even save lives!

2) They’ll be more efficient. By eliminating human error from driving, self-driving cars will be able to maximize fuel efficiency and reduce traffic congestion as well as CO2 emissions.

3) They could help relieve traffic congestion. Self-driving cars are expected to be much more efficient at using roads because they won’t waste time looking for parking spaces, which could significantly reduce traffic jams.

4) You won’t have to own a car anymore. Since self-driving cars would likely be owned by companies rather than individuals, it would mean that fewer people would need to own a car since they wouldn’t need it for everyday transportation needs.

Do you want some other AI-based app ideas? Have a look at some exclusive mobile app ideas for startups?

In conclusion, it is clear that artificial intelligence can and will have a great impact on our everyday lives. It’s happening in almost every industry, from healthcare to finance to autonomous vehicles. Inevitably, it will change how we live and what we do on a daily basis. We can choose to stay out of its reach or embrace it and hope for an even brighter future ahead of us where human lives are no longer at risk.

It all started with a dream of taking drivers off of our roads and making things easier for everyone. We are now at a stage where we can’t turn back. The reason is future technologies will only advance, requiring us to further rely on them for everyday tasks. When will it all stop? Will these technologies ever become so advanced that they have intelligence far greater than our own? Where does it end? Only time will tell.