How Much Does It Cost to Hire Software Developer in 2023?

But don’t worry! Here we have covered everything that helps you understand where to start, what to consider and what to count.

Usually, when you hire a software developer, the price you’ll pay is typically determined by the amount of time that person works on your project and the difficulty level of the problem you’re having them solve.

Because we work with so many software developers, we decided to do some research to come up with a rough estimate of how much it costs to hire a software developer, depending on which service or product you’re looking for, and how long you want them to work on it.

Now hiring a software developer or estimating its recruitment cost is no more left a simple task. There is so much to understand and evaluate.

So let’s get into the details to understand the cost to hire software developer in 2023.

How Much Does It Cost to Hire a Software Developer?

Whether you are a startup or a leading entrepreneur, how much does it cost to hire a software developer will be a pressing concern to everyone. But unfortunately, there is no straightforward answer to this question.

There is a different cost to hiring software developers to different businesses. So let’s take a sneek peak of market survey reports and understand the opinion of market experts..

In a nutshell, the cost to hire an Indian app developer can widely vary depending upon many factors such as experience, certifications, additional skills, and more. Before you get straight into the process to hire Android app developers in India, it is worth understanding the factors affecting the cost to hire software developers.

What Are The Major Factors Affecting the Hourly Cost to Hire Software Developers?

A software developer’s hourly rate is determined by many different factors, including their expertise, experience level and location. For example, in the United States, the average cost of a software developer ranges from $120-$200 per hour. Some of the additional factors that can affect hourly rates include:

1. The Type of Project Being Done (i.e., maintenance vs. new development)

The cost to hire software developer majorly depends upon your project scope. Different projects may have different needs and accordingly, there comes a variation in hourly cost for the developers. A small project may need only one developer, but a large project may require more.

In a nutshell, when shaping the scope of your project you should determine:

For example, for an app that tracks the items on your grocery list, you might only need one developer to work on the mobile app and web version of the app. But for an online shopping site with tens of thousands of products in its inventory, it will likely need more developers working on various aspects of its software.

In a nutshell, the more complex and various technologies required, the higher custom software development cost will be.

Different programming languages also impact cost to hire software developer. Determine whether you are hiring an Android app developer in India with specific knowledge of Java or a React Native developer that can build an app compatible with multiple platforms.

The hourly cost to hire software developer greatly depends on choice of programming language you pick for the project.

Similarly, hourly rates will range between $20-$50 per hour for those who are entry-level programmers but have intermediate programming languages knowledge (e.g., Java) while they will be closer to $150 per hour for those who are senior programmers and have extensive programming languages knowledge (e.g., C++).

If the company has a staff of full-time employees, then they will likely be paid higher wages than freelancers and contractors. Hiring someone as a contractor rather than a full-time employee could save companies as much as 50% per year on salary alone.

5. Cost To Hire Software Developer Can Vary As Per Location

Offshore programmers can be hired at about 25% less salary rates compared to those living in developed countries such as USA or Canada. However, these offshore teams may not provide 24/7 support for your business. They might charge a premium for emergency situations.

On the other hand, if you’re looking for talent in Europe or the Asia Pacific region, including India and China, the prices decrease dramatically due to the low cost of living and availability of high talent.

The average price range for freelance software developers falls between $75-$150 per hour depending on skill set. That equates to $30k-$60k annually assuming 40 hours per week and 8 weeks off per year.

As a result, many companies choose to hire people on a freelance basis because there’s no overhead. If you’ve got a lot of time-sensitive tasks coming up, and don’t want to commit long-term yet, consider going the contract route.

Alternatively, consider hiring someone full-time Indian mobile app developer as they can often deliver faster results over short periods of time. What’s important to note is that most freelancers are able to cover all types of IT service areas so be sure you know what type of person would best suit your needs before deciding which avenue to take.

Read More: Top Software Development Trends To Look For In 2023

While there are so many factors affecting the hourly cost to hire software developer, you must cost confused about determining the cost to hire Android app developers.

If you are still trying to figure out how much will it cost to hire a software developer , then you first need to understand the types of software development companies and its hourly rate comparison.

So let’s get into the details of each hiring model:

Based on the Glassdoor ratings, freelancers charge an annual rate of $82,978 per year and the cost will vary according to the project, ranging from small to enterprise. However, when hiring freelancers for large and enterprise-level projects, it can be a costly, but unrewarding, decision as the freelancer is more prone to abandoning projects, sometimes mid-project and sometimes unable to provide a continuous stream of support.

Outsourcing is considered the best choice for software development as you have access to worldwide talent with varying prices. Regardless of the size of your business, it is easy to find a software developer that fits your budget through this hiring option. Geniusee has been quoted saying that using an outsourced software developer can cost from $18 to $50 per hour depending on where they are from.

Different options of hiring an app developer cost you different prices. So these options bring you an idea about how much each option will cost you in their own ways.

But how would you decide which option is best to choose and when? 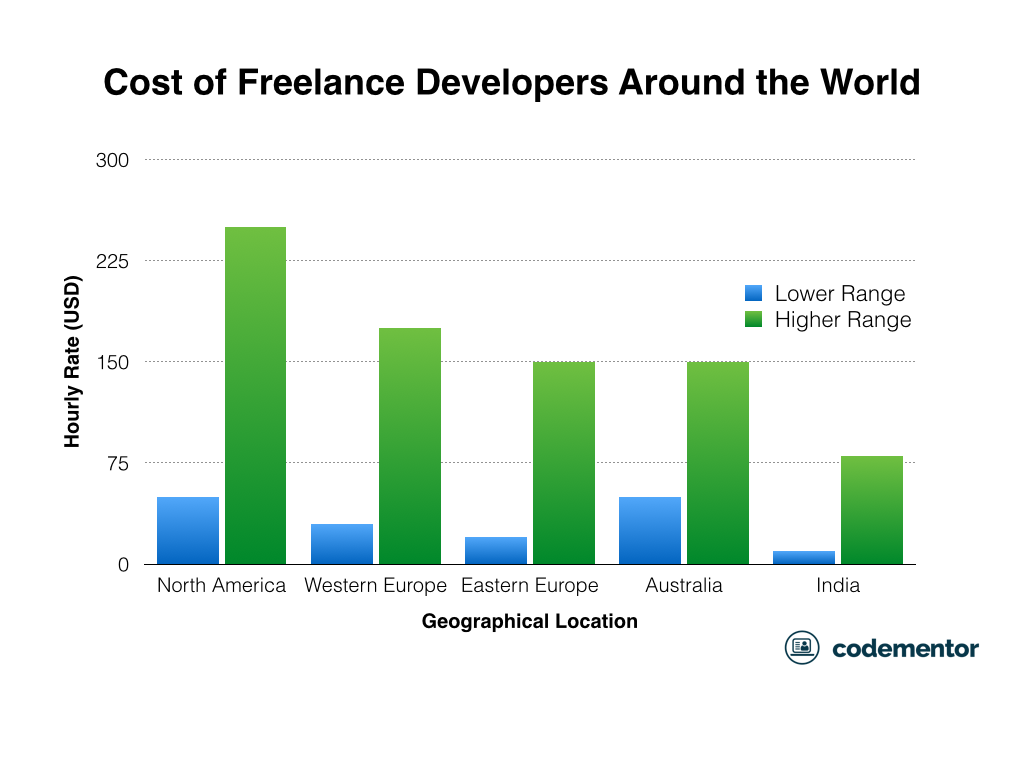 Hourly Cost To Hire Software Developers in the USA

The average hourly cost to hire software developer in the United States is $110. However, that number can fluctuate depending on their experience and where they live.

For example, an experienced software developer in the San Francisco Bay Area may charge $160 or more per hour while an entry-level programmer might only charge $60 per hour.

If you need someone to start immediately and are willing to pay more for them, you might be able to find someone charging as much as $250 per hour.

It’s easier than ever before to find freelance software developers for hire. But how do you know what price range is reasonable for your project?

There are a few factors that determine the total cost to hire software developer, and it turns out that the hourly rate can vary drastically from country to country. For example, according to PayScale, an average developer in Denmark earns €68.3 per hour whereas their counterparts in Poland earn €8.7. That’s more than six times as much!

To help you get started with setting your budget, we’ve compiled this handy list of average hourly rates across Europe:

Average Cost to Hire Software Developer in the India

The hourly cost to hire software developers in India is between $10 and $30 per hour. With these rates, it’s easy to see how quickly the costs can pile up.

But there are many other factors that affect the final price, such as: the size of the project; whether the developer will be working on it alone or with others; what software languages or frameworks need to be used; if there are any regulatory requirements for data protection or compliance; and whether you’re looking for just an initial consultation.

How To Hire the Best Software Developers For Your Project?

Before you make any decision to hire an app developer in India, make sure you consider this checklist to onboard the best talent.

The cost of hiring a software developer will vary depending on factors such as the complexity of the project, whether or not you’re hiring full-time or freelancing, and the country where the work is being done. This is why it’s important to have in-depth conversations with potential developers about your needs before making any commitments.

In contrast with other fields like graphic design, which tend to charge by hour or project, software development costs are usually based on per-hour rates. These can range from $45/hour all the way up to $300/hour for complex projects.

For this reason, it’s important that you spend time upfront working out your budget and how many hours your project might require before contacting developers about their rates.

If you are still clueless about how much does it cost to hire software developers for your project then #AppsDevPro can be your trusted platform. Our experts will evaluate your app idea and let you know what type of development team you need to deploy on your project.

For more details, you can contact us or drop your query below.

How Much Does It Cost To Hire Software Developer in India?

There are many benefits to hiring software developers from India. They are well known for their high-quality work and competitive prices. However, with so many companies and freelancers in the market, it is important to know how much you should be paying them.

The following are some tips on how much you should be paying Indian software developers:

When considering what type of contract to offer an Indian developer, it is important that they know all the requirements upfront. This can help prevent any misunderstandings or issues down the line.

How Much Does It Cost Per Hour to Make An App?