There are a bundle of options to create an Android app, but what’s the best backend programing language for Android app development? This is one of the most common questions that probably you asked when deciding upon on next app development project. To make it easier, we have a complete guide to the best programming languages for backend development.

A few years ago, when it comes to developing a mobile app, there was one code for iOS apps and one code for Android apps. But with the increasing advancement in technology and emerging backend programming languages, developing a native app has become much easier, faster and simpler.

To kickstart your app development process all you need is you determine what type of application you’re developing. Hiring mobile app developers that can understand your project needs and have expertise in top programming languages.

But unfortunately, it is not as simple as it may sound!

While we are not fortune tellers, but using our own predictions, experience, and expertise, we try to provide you with the list of the best backend programming languages.

Let’s get started with the best programming languages for backend development.

In the world of mobile app development, one question keeps coming up again and again— what programming language should I use to create my app?

The possibilities are endless, from Android-specific Java programming to more general backend frameworks like Python or Ruby on Rails. So before you hire an Indian Software Developer, you should consider this post. It will give you some options when deciding on your backend programming languages for your Android apps.

From where we should start and what backend programming languages we should have covered?

According to Statista, Javascript is the most used programming language for software development whereas Python, Java, C#, C++, and more are the near competitors of the JavaScript language. 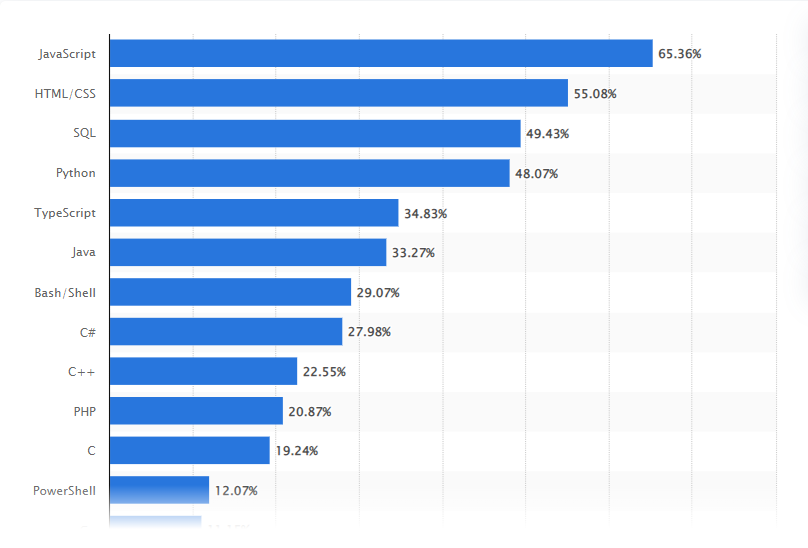 So let’s evaluate each language to make the right decision.

JavaScript is an extremely one of popular backend programming language and excellent for developing a backend for software applications. A majority of developers like to use it for a backend because it is open-source, light, and dynamic. It is also more powerful than some other languages, like Python for example.

JavaScript can be paired with many frameworks, like AngularJS, ReactJS, EmberJS, KnockoutJS, and so forth. It is usable in any type of web or mobile app development project and would be ideal for all sorts of software projects.

What are the benefits of using JavaScript as a Backend programing language?

Hopefully, these benefits encourage you to hire app developers in India to get started with the Android app development project. However, JavaScript also has drawbacks, such as scalability issues, and its not fast for use in situations requiring an increased speed of execution. Even though its syntax is off-putting, it becomes more expressive and concise once you adjust. 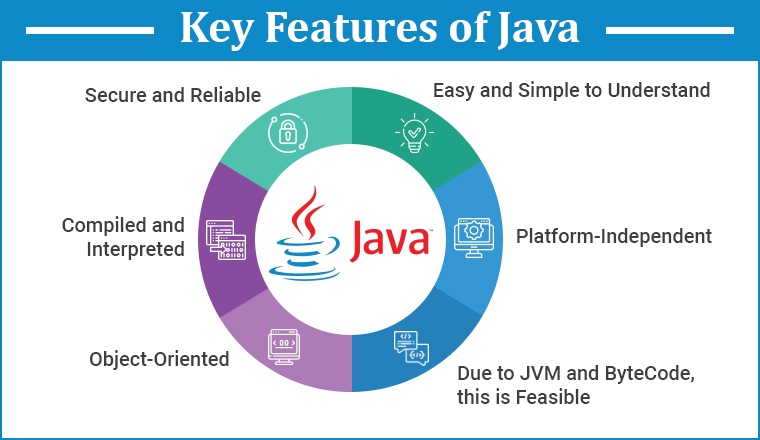 Since its release, it has gone on to become one of the most popular and widely used backend programming languages in the world. However, before you get straight into the process of hiring Android app developers in India, you must know what type of app backend you can create. What are the features of Java and more?

Java has a broad range of applications, spanning from gaming to enterprise software development. It can run on any operating system that supports an interpreter for this language, such as Windows or MacOSX.

Java is object-oriented programming (OOP) language, meaning that programs are built around objects with data fields, methods that are called upon by other objects, and behaviors that define how they interact with each other.

What are the significant advantages of using Java in Backend development?

Java has a number of advantages, including

Unfortunately, Java does have some downsides as well. It’s considered slower than other backend languages like Python or Ruby. Java also doesn’t work on Windows computers. For these reasons and more, many developers look for other alternatives as well.

Python is another outstanding backend programming language that was first introduced in 1991. This object-oriented, functional, and dynamically-typed server-side language is popular among developers due to its easy-to-read syntax. Indeed, you can read this language the same way you read English.

This being the case, there’s talk about Python’s usage and popularity among programming communities. It tops the list. According to a Statista survey, JavaScript came in at 2nd for most desired technology, as well. 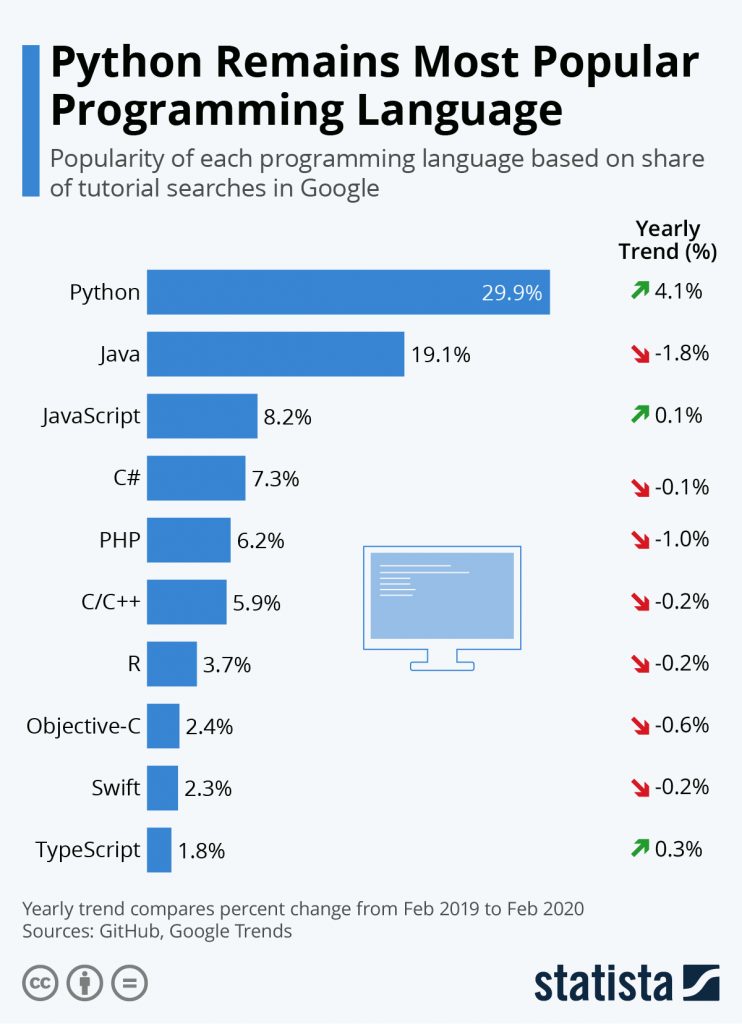 With major companies like Shopify, Spotify, Google, Uber, and Instacart trusting Python, this language has demonstrated that it has what it takes.

You can grab the opportunity to hire software developers in India to kickstart your app development project with python. What are the key features of this language? Is it the right backend programing language for android app development?

What Features Make Python a Winner Over Other Languages?

Here are the key highlights of Python that make it special over others.

The one downside of Python is that it doesn’t offer any protection against SQL injections, which could compromise your database, potentially leading to costly fines and problems with major implications. You can pay developers in the Python field to use the language’s backend.

4. C#: The Most Popular Backend Programming Language for Android Development

C# (pronounced see-sharp) is one of the general-purpose, backend programming languages designed by Microsoft as part of their .NET initiative.

It is used to create both console and GUI applications and usually runs on the Microsoft .NET Framework. C# was developed because many developers were dissatisfied with the dominant languages in use at the time, C++ and Java. It offers significant improvements over older languages such as C++ without compromising programmer productivity.

C# has two major releases available: an open-source release under the permissive MIT License and a closed-source one under a commercial license that can be purchased from Microsoft or other vendors. But before you hire Indian Android app developers to kickstart your development process, it is worth knowing the significant advantages of C#…

What are the significant advantages of using C# for app development?

You need to know these features which make C# a prime choice for developers.

C# is a great programming language, but it has some drawbacks. One drawback of C# is that the programs written in this language are not cross-platform compatible. This means that C# programs can only be used on Windows-based operating systems. Another downside of C# is that the code must be compiled before running it, which means you have to wait while your computer generates an executable file before you can actually use your program.

5. PHP: Counted as a Most Trusted Backend Programming Language

PHP is one of the most mature backend programming languages which has been around for a while and, as a result, has strong connections with databases like SQL. For people looking for that option, it is a fine option. While its syntax is not as elegant or swift as that of some newer languages, that does not make it a bad option for applications where it meets requirements.

It is likely that PHP would be the best backend language for Android app development because it is easy to understand, and it allows scripts to run directly in browsers – allowing one to easily access data from different sources.

Dynamic Features of PHP as a Backend Programming Language are:

Before you come to any conclusion, you should know that despite being the oldest backend programming language, it also has some limitations, One of the drawbacks of PHP is that it has a poor memory management system. This can make PHP run slowly and cause crashes. It also doesn’t offer support for functions such as ‘strings.’

Since the Google app store captured a significant market share of 70%, therefore, Android app development can bring an exciting field that provides many opportunities to grow and learn. But to get started all you need is to hire Indian software developers to create a successful app. However, whether you’re looking to get into the industry or are a seasoned professional, using a backend programming language can help you build more robust apps that take advantage of all of the features in the latest versions of Android.

If you have any project idea in mind and are still not sure which backend programming languages s you should use, then #AppsDevPro can be your ultimate destination. You can drop us a query or contact us.

What are Backend Programming Languages?

Why It is Important to Choose the Right Backend Programming Languages?

What Are The Leading Backend Programming Languages?

The most common backend programming languages are Java, C++, C#, Python, and JavaScript. Each of these languages has its own benefits and drawbacks which will suit a particular developer or project better than others.