Python is one of the most popular and versatile programming languages on the planet. It’s used for everything from web development to artificial intelligence to scientific computing, but how does one decide which application to create? This guide will help you explore the best possibilities of app development in Python. One can easily decide on building an app with Python based on your business requirements, what your budget might be, and how much time you can commit to the process.

App development in Python! Wondering how it is possible to build an app with Python?

As technology advances every day, it becomes increasingly challenging to decide what technology you should choose to build an application.

In the past, developers needed to be fluent in numerous programming languages and software development environments in order to have the most flexibility when it came to choosing the technology they’d use to create their applications and programs.

However, with the rise of powerful open-source platforms like Python, developers don’t need to worry about getting experience in several different programming languages in order to build high-performing applications.

Python has grown in popularity over the past decade and it’s almost certainly going to continue its ascent through the coming years. According to the survey, Python is declared a leading programming language in 2022 defeating the original coding languages like Java. 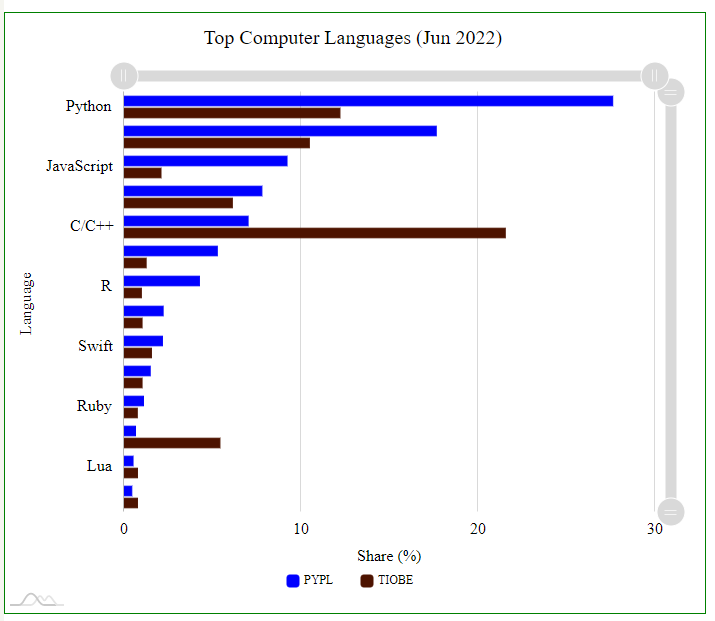 With its versatility and outgrown features, Python has taken a central place in the sphere of app development. In fact, over the years, developers have started trusting Python for the entire mobile app development process.

However, before you proceed to explore the possibilities of app development in Python and hiring Python developers, you must have a few questions in mind.

Here is a blog guide that you need to understand everything about building an app with Python.

Why is Python the Best Choice For App Development?

Python is a general-purpose programming language that has gained popularity in recent years for its simplicity, powerful data processing capabilities, and wide availability. It was created by Guido van Rossum in the late 1980s and was initially released in 1991.

The language provides constructs intended to enable clear programs on both small and large scales, including object-oriented programming. It also supports multiple programming paradigms. But the question is why choose Python for app development?

Python is one of the most popular programming languages for mobile app development. It’s simple, it’s powerful, and it’s easily accessible.

Here are some reasons why you should consider app development in Python:

Building an app with Python becomes easier with the huge community support. And because it is open source, you’ll also have access to any new updates that come along which means your code won’t fall behind and get outdated.

With that said, wondering whether it is as good for enterprise app development in Python. Well, we need to evaluate its features to understand how far it is possible to build complex enterprise applications.

A variety of businesses have already started to realize just how beneficial Python is as a programming language. Because of its versatility and scalability, app development in Python is becoming more popular.

“According to Evans Data Corporation, about 74 percent of organizations that use Python for enterprise application development are new adopters; 34 percent of existing organizations plan on adopting it in the future.”

The growing trend is evident across various sectors and fields, from finance and healthcare to IT, software development, and web design. In particular, many enterprises find Python’s versatility an asset because of its robustness and adaptability. Therefore they prefer hiring mobile app developers in India specializing in Python over other options.

Furthermore, when you need to build prototypes quickly or create apps for mobile devices, you might find Python to be a suitable option too.

But the central question is what are the best possibilities of app development in Python? Is Python for app development a good choice for enterprises? Let’s learn in the next section.

What are the Best Possibilities for App Development in Python?

Python is a dynamic, open-source programming language with many uses. The application development in Python has evolved over time to be more diverse. There are several types of applications that can be developed using python and they differ from one another depending on their function, platform, and other factors.

Python can be used to develop various types of applications, including audio/video ones. There are many ways to create an audio/video application with Python. For example, you can use a library called OpenCV to capture live video and convert it into a series of frames that can be processed by Python code. You can also control the camera through Python or even use Python for post-production editing.

There are multiple possibilities for app development in Python and building a gaming app is one of those popular options.

Building a gaming app using Python is a popular trend. To get started, all you need is to hire dedicated app developers in India. Python offers several libraries that developers can use for game development: Pygame, Panda3D, pyglet, and Urwid are some examples.

These libraries allow developers to create games by writing Python scripts or modules that control the game’s logic and user interface (UI). For example, with Pygame you can write code in Python to render graphics and process events from users or other sources such as timers. In general, a developer uses one library at a time; they cannot mix them.

A developer may choose the library based on what type of graphics they want to include in their game; if they want more complex graphics than an overhead 2D sprite-based game, then they might want to choose something like Panda3D which supports 3D rendering capabilities.

Blockchain technology is the latest in a long line of technological innovations that have shaped the world as we know it today. As such, it is important for developers to be aware of what this new technology has to offer.

Python is one programming language that can be used for developing blockchain applications in order to provide a streamlined experience for programmers and developers alike. Python comes with pre-built frameworks, libraries, and modules that are designed specifically to help you build blockchain apps fast.

The most popular blockchain development toolkit is Hyperledger Fabric, which allows for cross-organizational work on distributed ledger technologies and includes support from IBM. You can also use Ethereum smart contracts or the Bitcoin scripting engine to develop your applications.

Machine Learning, also known as artificial intelligence, is a branch of computer science that focuses on the construction and study of systems that can learn. Machine learning uses data to build models in order to make predictions about other data. By hiring mobile app developers in India, you can easily build an ML app with Python.

Python has been used extensively in the field, and it’s one language you’ll commonly find at machine learning conferences.

Machine learning applications are typically divided into two categories: supervised and unsupervised. In supervised learning, the system is trained with labeled data sets so that it can more accurately predict what happens in future cases. Unsupervised machine learning uses unlabeled datasets to uncover patterns or relationships among different variables.

App development in Python is possible for a variety of different purposes. For example, it is possible to use this programming language to create network security applications. These are primarily designed to protect computer networks from malicious threats such as hackers and malware.

It is also possible for someone who has some experience in the field of programming to learn how to create these types of applications using Python in just a few days or weeks depending on their skill level.

Using Python for app development is a perfect decision for enterprises and developing a business app could be one of the best options to consider in 2023.

The Business App could be a dashboard, an admin panel, or an application to automate and distribute tasks.  It all depends on the size and scope of the project you are working on. When developing a Business Application there are different frameworks that can be used. To make the best choice between various tools of Python, it is worth hiring an Indian App developer for Python development.

Some common frameworks for business applications include Django, Flask, Pyramid and Bottle which differ in their focus. Each framework has its own strengths and weaknesses that can make it more suitable for certain projects over others depending on what is needed by your particular business app.

These are a few possibilities of app development in Python, but before you hire an expert, you must be curious to know whether python has its own development tools for developers.

This doesn’t mean one option is better than another though. Each type of framework has its place depending on the needs of the project.

For more information about which type of Python frameworks are available for developing applications, it is recommended to hire Indian mobile app developers. They will evaluate your business requirements and help you build an app with python’s best suitable frameworks.

All you need is to hire a web app developer in India to help you decide what type of app you will be required to use. And AppsDevPro can be one of the ultimate platforms to hire app developers with 7+ years of experience. Having the expertise in handling multiple projects, they will help you design intuitive and easy-to-use applications.

So whether you need an expert opinion on developing an app with Python or looking for the experts to transform your idea into a product, then AppsDevPro can be your trusted platform to hire experts. You can drop your query below or contact us for more details.

Python is a programming language that was created in the late 1980s. It is open-source, which means that it’s free for people to use and modify. It has been built specifically with an emphasis on readability. This means that code written in Python tends to be easier to understand than code written in other languages like C++ or Java.

This is why app development in Python is becoming common practice for developers these days. Python is often used by programmers who need tools they can easily customize or edit quickly because there are many frameworks available for developers.

It also happens to be an incredibly popular language among those who work with data science because of its versatility and speediness.

Python is a versatile programming language that can be used for many purposes and in many industries. It is often an ideal choice for beginners as it has a clean syntax and simple data types, but it also has the capabilities to be used by advanced programmers.

One thing you might not know about Python is that it can be used to create an application. There are several different types of applications that can be developed using pythons, such as web applications, graphical applications, and desktop applications.

Python is an excellent language for developing business applications. It has a wide range of libraries, frameworks, and application tools that allow developers to quickly create software that is both robust and highly secure. The language also has a strong community that provides open-source support when the need arises.

Python’s reliance on the interpreter means it can be easily modified or extended as needed and compiled versions are available for those who require additional performance.